A plumbing company’s billboard in Roanoke, Va., gave me a powerful reminder of just what the right message can do in recruiting. It would have stopped me in my tracks if I hadn’t been driving at 50 mph. 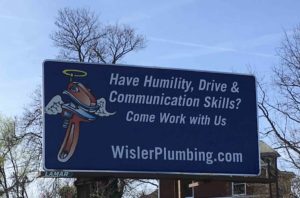 But that didn’t matter, because the message was unforgettable. It read:

“Have humility, drive, & communications skills? Come work with us. WislerPlumbing.com.”

My mind’s wheels started turning as fast as the ones under my rental car. What plumbing company leads with “humility” as a job qualification, I asked myself. Then the wheels moved me quickly to, “And why doesn’t every company lead with this?”

So I looked up the company, found the name of the owner, and made a call. I asked for James Wisler.

“He’s in an interview right now,” I was told. (Of course.) “May I put you into his voicemail, and he can call you back?”

Which he did, late that day.

“It’s pretty simple,” he explained, after I told him how the billboard surprised and captivated me in so many ways. “We don’t hire for skill set, because we can teach that. We’re looking for character, and we go from there.”

James filled me in: Wisler Plumbing is a growing company, with a challenge finding people experienced in the plumbing trade in the Roanoke metropolitan area. He also has a compelling belief in trusted teamwork and serving customers well.

In his job interviews—he meets with 3 or 4 candidates a week—he explores first for character and values. What does this person care about and how do they live it, he wants to learn. Will they fit well with our team, and help us deliver great service to our customers, most of whom are homeowners and care a lot about

whatever they’re asking our help with? He likes to ask candidates what they’ve learned from people who are much better at something than they are.

“I’ve made my share of mistakes in hiring,” James said. “But t

his approach has served us well. I have hired many people who know nothing about the trade, who have never even seen a plumbing fitting. We can train them how to do the job. But character—that’s hard to teach.”

The billboard that caught me cold might be unique for a plumbing company, but the message is a natural part of Wisler Plumbing’s overall recruiting approach—as I learned when I explored the hiring section of wislerplumbing.com. James credits the book “The Ideal Team Player,” by Patrick Lencioni, for informing his recruiting philosophy and the billboard message itself.

“The billboard text is a close translation of Lencioni’s view of the three things that make a great team player—he calls them humility, hunger, and smarts,” James said.

James also agrees with Lencioni that all three qualities are important. “If you have humility without drive, you’re too passive,” he said. “If you have smarts without humility, you might be manipulative.” He’s looking for the trifecta: a willingness to learn, a desire to work hard, and an ability to work well with others,

either customers or teammates.

The billboard’s ultra-simple recruiting message has been effective, James said. It rotates among other area billboards that advertise Wisler Plumbing’s services. “I’m sure many people seeing the billboard don’t get it, but then they’re probably not the people we’re targeting.” (James also said they sometimes hear from people calling to say the billboard is missing a phone number. “I guess they managed to find us,” he said with a laugh.)

Wisler’s billboard may not lead with pay and benefits, but he gets to those important wallet topics in his website’s recruiting video. There James t

alks about the company’s paid training and offers an example of a recent business school graduate who joined Wisler to learn the trade. He also mentions the daily hot breakfast that Wisler provides for employees, “a time when our team can get together and reflect on yesterday and be able to look forward to what’s in front of us for that day as well.”

James seems to have an instinct for creating the environment I believe employees need to thrive—where they believe in a shared mission, belong to a trusting community, and know that they matter to the company and its success.

Beyond the leadership lessons implicit here, the Wis

ler recruiting approach is a bright reminder for each of us to decide what’s really most important and then to select without apology—whether choosing new hires or new clients. It’s not that all will be well; it’s just that such selection tends to optimize things over time, and the clarity is so freeing.

When I asked James if he’d be OK with my writing about the billboard and our conversation, he said yes, but told me to be sure to credit the Patrick Lencioni book. “I’m not that smart a guy, and I borrow things from everywhere.”

Well, James, you might be able to borrow messaging and hiring tips. But humility—that’s hard, and that’s yours.