We can assume that Special Counsel Robert Mueller was happy with the text of the report released last week—or as happy as one gets with such an undertaking. As a document, it is a clean, professional product worthy of Mueller’s reputation as a serious-minded public servant. 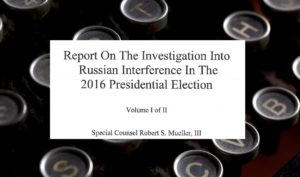 But could the report have been clearer? Could a fast rewrite (one of the services I offer) help it read easier and deliver key points more sharply—while still remaining faithful to the authors’ intent?

I decided to test the hypothetical question myself, on a portion of the report. Here were my rules:

In other words, pretend Mueller’s my client, and offer him a good-faith rewrite that helps him achieve more of what he’s trying to achieve—or achieve the same goals easier.

The sections I chose were the introduction and executive summary of Volume I, not because they were most interesting or had the most room for improvement, but because they’re first—in responsibility and opportunity.

As a partial example, here are the opening paragraphs of the introduction as originally published:

The Russian government interfered in the 2016 presidential election in sweeping and systematic fashion. Evidence of Russian government operations began to surface in mid-2016. In June, the Democratic National Committee and its cyber response team publicly announced that Russian hackers had compromised its computer network. Releases of hacked materials—hacks that public reporting soon attributed to the Russian government—began that same month. Additional releases followed in July through the organization WikiLeaks, with further releases in October and November.

And here are the opening paragraphs of my rewrite:

The Special Counsel was instructed to investigate the Russian government’s efforts to interfere in the 2016 presidential election, including any links or coordination between the Russian government and individuals associated with the Trump Campaign. This report, submitted to the Attorney General pursuant to 28 C.F.R. § 600.8(c), details the evidence and rationale supporting three main findings:

As to my hypothetical question: could a rewrite have made a positive difference? My exercise told me yes, it could have.

But you can judge for yourself. See the complete result, with original, redlined, and finished versions, by downloading the entire multi-part document here. Your feedback is welcome, in comments here or via email to mike@michaelgreencommunications.com.